CALIFORNIA SUCKS! Why? We do NOT Recycle the Ubiquitous Styrofoam Packaging

RECYCLE STYROFOAM? NOT SO FAST! Holiday season is often filled with gifts in cardboard boxes, packed with styrofoam to protect the contents. Time to look into what to do with styrofoam packaging. Result? So frustrating. Indeed, 25% of our land fill is styrofoam - is that really possible? Is that acceptable to you? It's not to me! It appears that it is almost impossible to recycle the stuff (see article). Your best best is to "store it and re-use it when you ship stuff" - huh? That is a ridiculous suggestion, IMHO (as in - where am I going to store it all?). https://www.hunker.com/12002950/how-to-recycle-styrofoam-in-california

Rich Old White People! Can't We Just Hate Them All?

Hysterical how liberals have continuously bashed the "old white men" who crafted our amazing Constitution, particularly that stupid electoral college thing. The American Revolution started in 1776, and the Constitutional Convention took place in the summer of 1787. There were 39 signers of the constitution, with an average age of 44. The youngest was 26, and the oldest was senior statesman Ben Franklin, at age 81. https://www.archives.gov/founding-docs/signers-factsheet 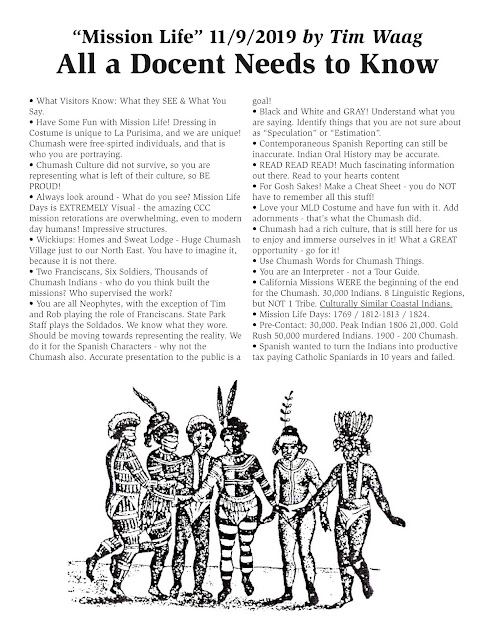 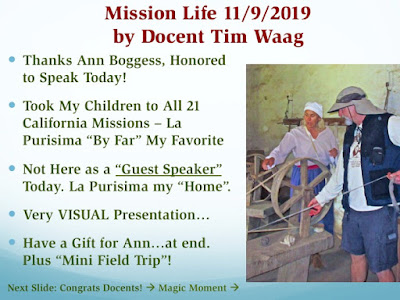 Ann. I don’t expect any of this to be incorporated into the document, and all of it is at your discretion (of course) and those of the “partners”. However, I believe my comments to be accurate, and I believe you and I have discussed all these points before. I do want to put this information out there for your consumption (at least). Thanks! 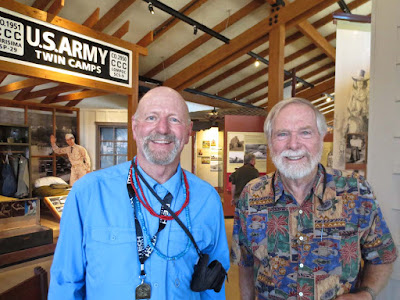 PHOTO ABOVE: Tim (left) with the esteemed Dr. Glenn Farris, Senior California State Archaeologist (Retired) https://www.parks.ca.gov/?page_id=23309
Cultural Resources Division. Read his warehouse paper many (too many?) times, and wrote my lowly article for Las Noticias (elsewhere on this site) based on his 28 page summary of his California State Park team's 1965 excavation. First time I have met him.

Funny that Dr. Farris and I look a lot alike - I think (except I don't have any hair up top - but perfect for my role at La Purisima where I portray  a Franciscan!). Interestingly, my older brother came up with the correct term for this: tonsure (I hate that he is so much smarter than me, darn you - Will Waag!). Definition Tonsure: the Roman Catholic or Eastern rite of admission to the clerical state by the clipping or shaving of a portion of the head.
Read more »
Posted by Tim Waag at 2:05 PM No comments:

The complete article (including these updates) can be found at:
https://timwaagblog.blogspot.com/2019/10/la-purisimas-mysterious-warehouse.html

Dr. Farris gave a 1 hour presentation based on his 1965 - 1966 excavation of the Warehouse at La Purisima State Historic Park. I was able to ask many questions and get facts confirmed and questions answered. Here is my "shopping list" of information acquired or confirmed from that date. In addition, Dr. Farris sent me an email afterwards with 2 additional corrections, which are below. Many thanks to Dr. Farris for his tolerance of my many questions to him.
- (DR. FARRIS directed correction). Esteemed archaeologist Professor James Deetz of UCSB Archaeology / Anthropology was responsible for the 1960's excavation of the Warehouse, and Dr. Farris was involved in the 1965 - 1966 work.
- (DR. FARRIS directed correction). The warehouse structure was approximately 200 feet long and 58 feet wide - in contrast wit the larger La Purisimax Chapel and Residence adobe buildings, which were about the same width, but 300 feet long. The warehouse footprint was roughly 2/3 the length and the same width as the Chapel and Residence.
- There are no mission era records of Los Berros Canyon Warehouse construction. However, given the vagueness of communication back in that era, there is mention of a "Rancho San Antonio" Warehouse that was not far from the Purisima warehouse location. Dr. Farris believes it was possible that the Los Berros warehouse was misidentified as the Rancho San Antonio warehouse, though that seems unlikely. He showed a map of the Purisimax mission holdings that showed the Rancho San Antonio.
- Fr. Mariano Payeras, OFM did mention the warehouse in his correspondence during 1816.
- Fortunately for us that an 1850's surveyor actually took measurements of the Warehouse Foundation, so we have superbly accurate dimensions of the footprint of the building.
- The CCC may not have restored the warehouse along with the other major buildings at La Purisima because the warehouse was located on a different piece of property that was not retained for reconstruction by the CCC.
- A few other good Mission Warehouse examples survived long enough to be photographed or sketched. Buildings of similar functions at nearby missions often did not differ in design and execution. Examples of warehouse include: Temecula (Mission San Diego Assistencia), Mission San Francisco (William Dougal 1949 - Off For California: The letters, log and sketches of William H. Dougal, Gold Rush Artist. Edited by Frank M. Stanger with a forword by Joseph A. Sullivan)
- Confirmed that warehouse likely "stepped down" as there is a 9' foot drop from North to South along the long side of the warehouse.
- Warehouse rock foundation is 4.2 feet deep and much wider than the adobe walls at 4.5 - 5 feet wide.
- Few artifacts found at the warehouse during the various digs. For instance, only "one trade bead" found.
- "Cannon Bone" of a horse found at warehouse. Below the knee of a horse is the cannon bone which is also known as the 3rd metacarpal.
- "Matanza" (threshing floor?) found adjacent to the warehouse (see "Artist rendition" drawing which shows a threshing floor ). La era means "threshing floor" today. Today, Matanza means "slaughtering".
- Mission San Antonio and Santa Ines has a large circular stone "threshing floor" extant. 160 horses ran around threshing the flour! Indian's called out "yegua" (mares), "cambia" (turn) - it has been reported (somewhere in the historic record).
- Confirmed: There were no "cross walls" in the warehouse, which is unusual. Other warehouses had them, and it contributed to the stability of such a large adobe structure.
- Three infirmaries at La Purisima (many sick). 10 sets of rooms. Open rooms like a "field hospital". Should we know more about these structures.
- "Underreported structures" at La Purisima: Married Indian Housing, Warehouse, Infirmaries.
- Discussed leaving sites untouched for future exploration with "better methods" and perhaps (hopefully) "better funding". La Purisima has many such sites in these "under-reported structures".
END OF UPDATES. These updates have been incorporated into the article below.

ORIGINAL "LAS NOTICAS" (DOCENT NEWSLETTER) ARTICLE: After the massive earthquakes and flooding in 1812 destroyed the original La Purisima Concepcion site, the new mission across the Santa Ines river received a massive amount of building and growth under the dynamic leadership of Fr. Payeras. One of the first structures built at a new mission site is typically a storage building, as there is immediate need for securing food and property. Plus, in the early days, such a mission building often doubled as the church and shelter. 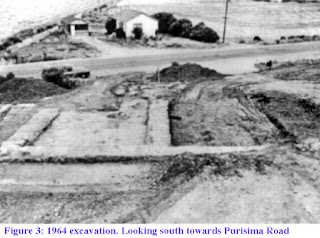 My hideously ugly back. Now with railroad tracks. 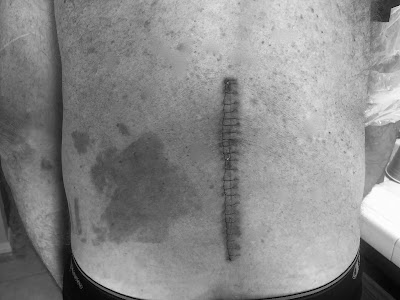 CAUTION: Sue and I are "tag teamers' in raising our kids, work around the house, our law firm etc. If one of us is good at it, the other person does something else. This is the case here. I was struggling through some fairly brutal experiences in pain, trying to keep my wits about me and survive. Sue took on all the doctors and nurses and medications and treatments. As a first notch lawyer, Sue's legal skills matched perfectly with her skill as an advocate to monitor the medical treatment I received. As such, I may have gotten some minor details below wrong - in fact I'm sure of it. Take everything below with AT LEAST a small grain of salt. Note also that I intentionally left many horrific details of this story out, so you are not getting short-changed either!